Holistic Think Tank is a non-profit organization whose aim is to promote a new way of thinking about education and provide schools with concrete systematic solutions. 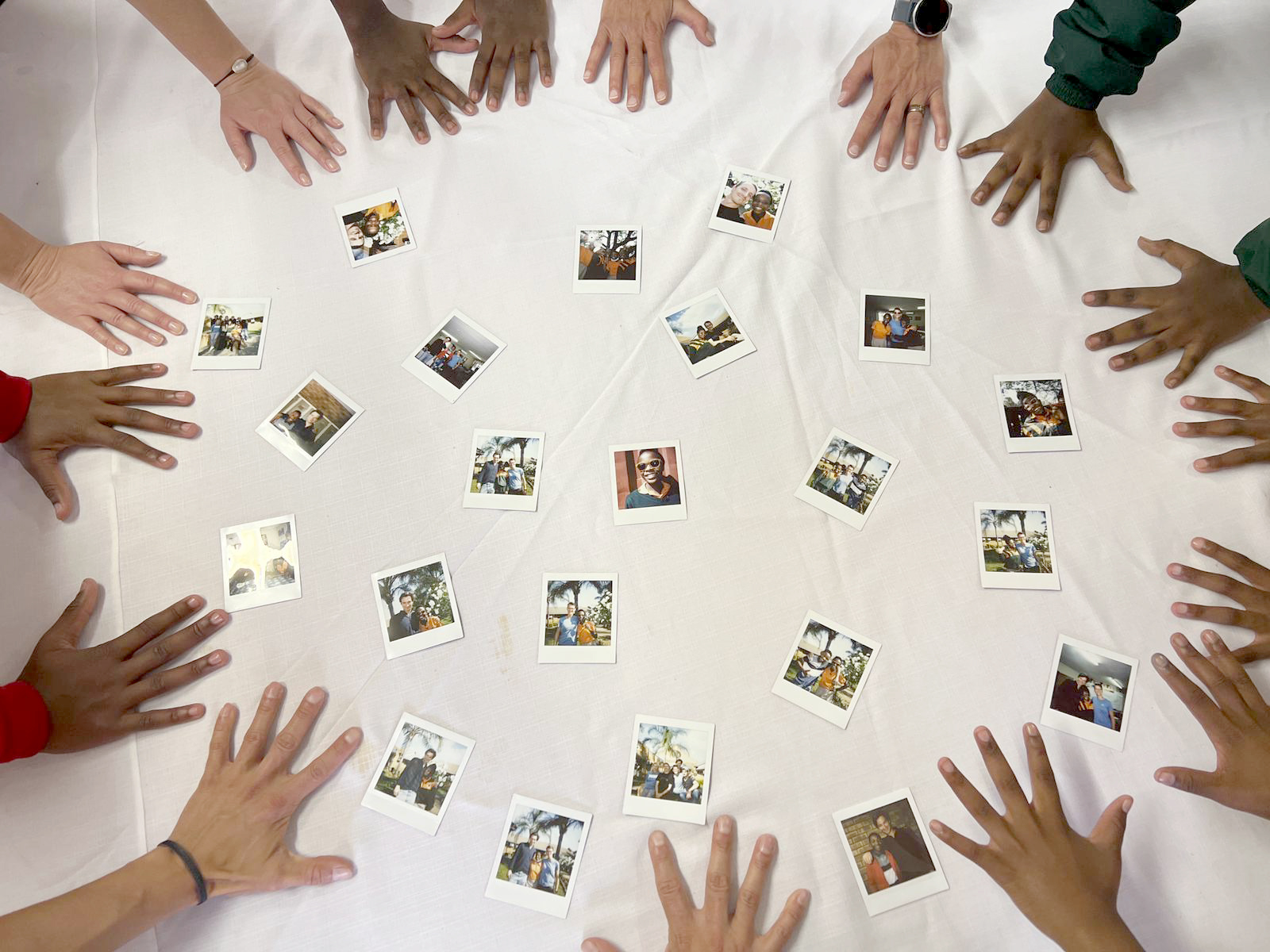 Today’s schools are a contradiction of the sense of ​​education.

They convey knowledge and facts but do not show how to understand them and use it in everyday life. They strengthen competition for grades and achievements, but not teach how to cooperate and communicate with others. They require continuous teaching progress, but do not show how to achieve it in accordance with the child’s predispositions. Yet each of us is different, and this uniqueness constitutes a real value for society.

It is high time to restore meaning to school as a place of shaping responsible and conscious generations, but – above all – happy and fulfilled people.

Our phenomenographic research carried out in 10 countries around the world showed that an overriding goal of teaching every single subject at school should be learning and developing humanistic values, based on freedom and respect for others, as well as the ability to build good interpersonal relations and understand each other. This is the foundation of our culture and civilization.

The mission of Holistic Think Tank is to change the priorities of education towards humanization of the school curricula, through implementing a holistic way of teaching all the school subjects. Our guideline is a list of “What School Ought to Teach” (see: https://holisticthinktank.com/about-us/), prepared by our Researchers.

We are convinced that knowledge acquired in the course of learning for ex. mathematics, history or chemistry is only a means of getting to know oneself and others and shaping the ability to cooperate with them. This is the real purpose of education. Hence, all the school subjects should be taught in the same, coherent way, using universal power skills as the basis in the process of gaining specialized subject knowledge. At last, human beings are the most important subject of the whole process of education.

We propose an original approach to working with students, as a tool for changing educational priorities in primary schools, based on the adjusting to reality system of guidelines for teaching all the school subjects. We call it “humanization of school curricula”, understood as instilling into the teaching process of all subjects at school a new teaching methodology, called the “Interdisciplinary Subject” (IDS). The purpose of IDS is to convey to students the system of universal, humanistic values, which will enable them to have a conscious and fulfilled adult life.

The change, we are striving for, implies also a modification of the criteria for assessing knowledge in each subject, where the focus should be shifted to the field of information processing skills, the ability to use knowledge (and not only to gain it), but – above all – in the area of ​​communication, relations and cooperation in the social environment. We focus on addressing the holistic needs of the individual as part of society.

For as human beings, we can only learn ourselves in contact with others. We don’t come from ourselves, we are not for ourselves and we don’t die for ourselves.

A caring, humanized school is possible. We can start building it together today.

IN FOCUS: What schools ought to teach (WSOT)

How to confront themselves with challenges, including especially »

problem formulation, that is, being able to formulate a problem at many levels of abstraction, presenting it in a concise form that facilitates its further analysis and with a view to solving it later on by employing different methods and tools;

problem decomposition, that is, being able to break the problem into components (constitutive elements) and reduce it to easily solvable elements (recursion);

problem solving, in other words: finding the way out of a novel situation based on previously acquired knowledge and skills/competencies;

collection and ordering of data, that is, drawing data in from all available sources and ordering it logically to facilitate its further analysis;

critical thinking, which encompasses the practical skills involved in finding and interpreting information and the competences of proper judgement and effective reasoning related thereto.

How to function in relation to the world and nature, as well as with one’s own body. In particular, they should focus on »

searching out recurrent patterns, reasoning abstractly, and creating models, especially finding schema, identifying regularities and repetitive sequences of patterns occurring in a concept, as well as being able to present those data that are essential while eliminating those that are not, and to generalize and present a problem as a model or simulation;

sustaining, tending to, and justly distributing both natural and cultural resources, which means being aware of the common good and responsibility for the world, in particular in conscious choices and acts aimed at the common good;

making choices based on the common good, therefore based on empathy towards others and sustainable usage of natural resources, as well as cooperation with nature.

The ideas of science and scholarship (learning), including especially »

respect for scientific and scholarly achievements, namely, to hold truth, scientific facts, and research heritage in high regard, while remaining open to new developments;

how to analyze sources, namely, how to understand the context in which facts are presented, along with the possibility of their different interpretation relative to the standpoint or perspective being assumed;

positive attitude towards learning and an attitude of openness in relation to new experiences, which should translate into discovering gaps in one’s own knowledge, based on which new developmental goals are then set, in addition to the attitude of lifelong learning, in accordance with which acquiring knowledge is a process both variable and dynamic;

knowledge both empowering one to think and act autonomously in a given field, and subsequently generating further knowledge, namely, how to first use knowledge independently and then use it to seek further knowledge instead of deriving it from others’ expressed experiences;

self-regulated learning, namely, an efficient and self-reliant process for planning, estimating, forecasting, and noticing one’s own capabilities, and being able to determine the level of usefulness of each of them.

How to function in society. In particular, they should emphasize »

participation, that is, an active engagement in the educational process, where an active individual becomes co-responsible for his or her own development and thereby also for other social processes;

respect, that is, evident appreciation of a variety of opinions and beliefs, and due regard for different cultures and religions, as well as for human rights, justice, etc.;

reflection, that is, the ability to contribute to society accompanied by a critical approach; capacity for well thought-out and responsible participation in the economic, social, cultural, and political life, as well as for presenting a critical stance towards prevalent but transient/changeable values, along with an ability to order such values hierarchically;

ways to deal with conflicts, that is, searching for solutions that will be workable and beneficial for all parties involved, wise use of others’ assistance, ability to admit one’s own mistakes and errors, demonstrating understanding towards others’ stances, and preventing the deepening of divisions;

recognition of bias and privilege, that is, perceiving one’s own prejudices and cultivating the ability to identify privilege both in oneself and in others, including in everyday institutional functioning, as well as recognizing the impact of the foregoing on society and its internal dynamics and relationships.

Aesthetic and cultural awareness, including especially »

how to assign meaning, in particular, how to decode the culturally significant elements in one’s everyday reality, and how to recognize different values and various shades of meaning;

aesthetic competencies, especially in the context of language usage; how to transfer the aesthetic qualities of language associated with higher art into one’s everyday language;

awareness of sound, which means using the full potential of sounds to mark mathematical and material similarities, differences, and qualities of subjects one deals with;

conversation analysis (CA), that is, being capable of recognizing the aesthetic aspects of non-verbal communication comprising bodily gestures, and facial expression or countenance, therefore noticing such physical aspects as to facilitate greater acknowledgement of an individual’s circumstances;

creativity, namely, how to actualize one’s natural potential through activity pertaining to various fields of art (music, the visual and graphic arts, as well as other creative fields).

How to function in variable contexts and environments. In particular, they should teach »

how to deal with differences, therefore, knowledge of cultural differences and of appropriate rules of behaviour in various social situations, especially unfamiliar ones; awareness of prejudice and discrimination, ability to adapt to the wishes or needs of others, and considering the consequences of differences between people and various cultural backgrounds for important social processes, such as exclusion or inclusion;

local and global understanding, that is, the understanding of the contemporary world both as a whole and as the particular processes – political, social, economic, and any others, that shape it; connecting global issues with their corresponding local dimensions;

global literacy, that is, understanding people from other cultures who speak different languages, and being able to interact and cooperate with them;

How to function in relation to the state. In particular, they should focus on »

social justice, namely, overcoming systemic and structural inequalities, as well as dealing with power relations that pertain to everyday interactions, including amongst children, and between children and their teachers, tutors, and care providers;

social responsibility, that is, knowledge and the attitudes stemming therefrom, that facilitate consideration of common good and shared social interest in making one’s decisions, such as: solidarity, non-discrimination, a sense of belonging, and a protective outlook towards environmental and cultural heritage;

democratic action, that is, an ability to stress legitimate entitlement in interactions with political authorities;, participating in civil society; being able to engage in activism and initiate change.

being proactive, namely, single-handedly initiating activities and assuming accountability for them;

planning, that is, dividing learning and future endeavours into periods and portions determined by reasonable goals;

hope, that is, envisioning the future in such a way that it motivates one to follow through with endeavours;

tenacity, that is, due perseverance in one’s endeavours and pursuits.

Interpersonal communication. In particular, they should teach »

communication skills and ability to change perspectives, that is, getting both one’s intentions and actions across whilst communicating them to one’s leaders, representatives, and fellow citizens; being capable of listening to one another, understanding other people’s interests, and attaining compromise within communities; developing a capacity for effective conflict resolution and respect for different perspectives;

how to properly verbalize one’s thoughts, that is, making use of appropriate terminology to verbalize discovered meanings and communicate them to others, thereby conveying them;

how to attain a state of anticipatory emptiness, namely, the readiness to accept an unexpected meaning; an attitude of openness both to development and to discoveries, narratives, and non-obvious interpretations; mindfulness; openness with no preconceived expectation;

how to be humane, which means causing no harm, and exhibiting sympathy, empathy, and self-control, as well as kindness and benevolence;

how to remain aware of one’s own uniqueness, that is, how to understand one’s own changeability in time and individual rate of development based on a multitude of patterns;

self-assessment and self-evaluation, that is, how to draw conclusions, learn from both positive and negative experiences, and display a healthy attitude towards one’s shortcomings, losses, defeats, and inadequacies, in addition to openness to feedback;

self-awareness, which should translate into being capable of making judgements, keeping promises, reasoning, and articulating one’s thoughts by means of both spoken and written language and other means, as well as of transcending one’s “self” and perceiving oneself as an element of a greater whole; ensuring that humanity remains connected to the world of nature;

intellectual humility, that is, the ability to doubt one’s own knowledge without discrediting what one has already learned;

how to remain life-oriented, namely, how to orient oneself toward broadly-understood life while fulfilling a necessarily narrowly focussed professional career. 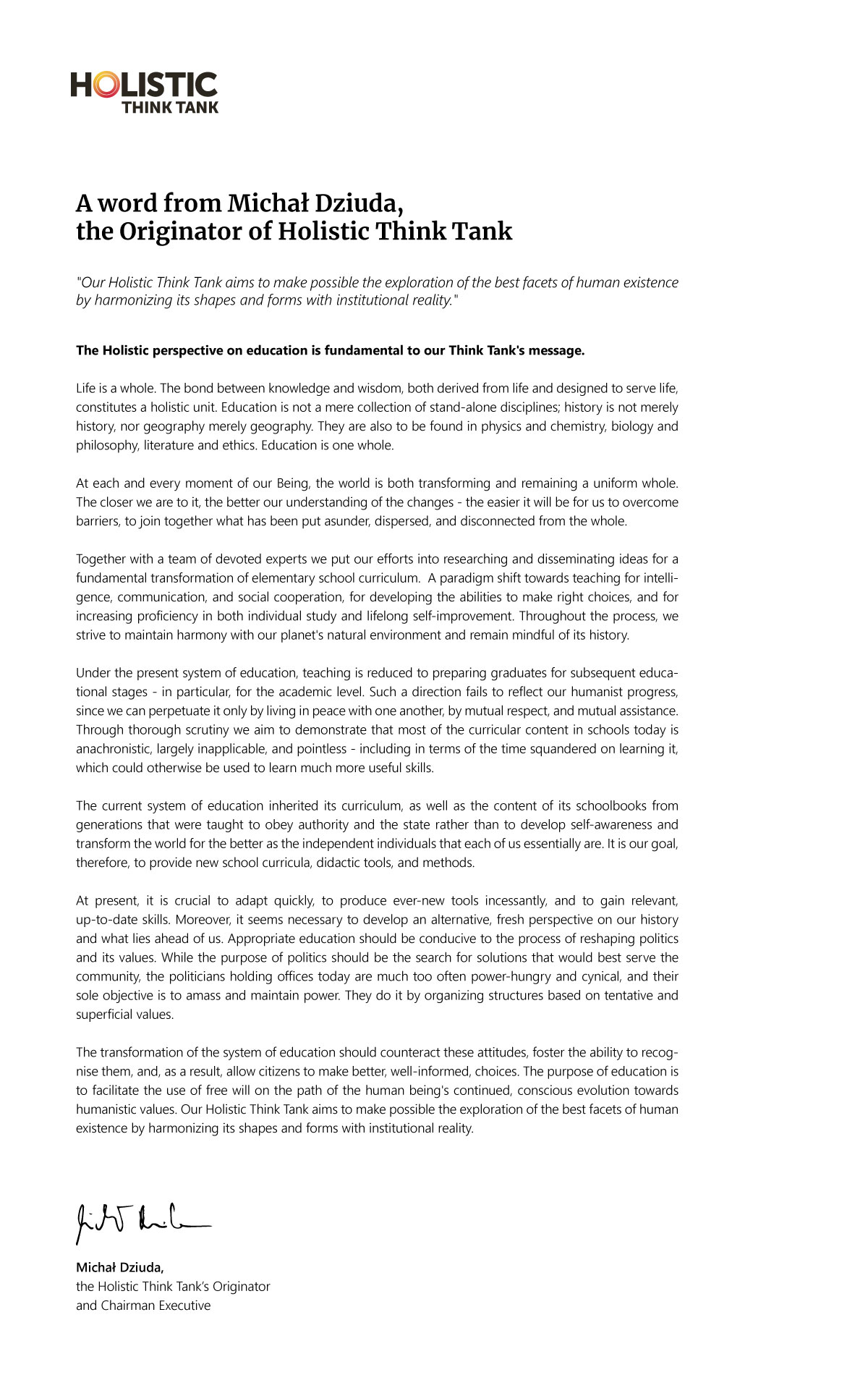